OSCAR WILDE, A VAGABOND WITH A MISSION: THE STORY OF OSCAR WILDE’S LECTURE TOURS OF BRITAIN AND IRELAND
by GEOFF DIBB 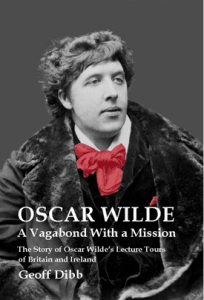 Postage for single copies outside the UK is £10.00 for Europe and £16.50 for the rest of the world. Payment from overseas by PayPal please. Payment in the UK by PayPal or cheque made payable to the Oscar Wilde Society.

To order your copy, email Geoff.

Geoff Dibb digs deep into ground over which Oscar’s biographers have so far merely skated. His tireless researches have produced a treasure trove of lecture extracts, contemporary press reports and ephemera that shine significant new light on a formative period in Wilde’s life and literary development.
JONATHAN FRYER, Writer and Broadcaster

OSCAR WILDE, A VAGABOND WITH A MISSION is the first comprehensive study of Wilde’s lecture tours of Great Britain and Ireland between 1883 and 1889. Using letters, memoirs, biographies, previously unpublished information and thousands of contemporary newspaper accounts, Geoff Dibb gives us a portrait of Wilde which we have never seen
before. Click here to read a review by Matthew Sturgis.

DEATH IN GENOA by Thomas Wright 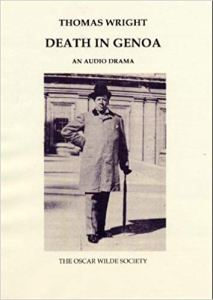 The first edition of a play by the author of OSCAR’S BOOKS.

Death in Genoa is an imaginative dramatic reconstruction of Oscar Wilde’s visit to his wife’s grave in Genoa, on 26 February 1899 (a poignant and little-known episode in his life), and of the time he spent in the Ligurian city. The drama is based on fact, but it is a work of fiction. A ‘Made in Manchester/Dark Smile’ production, the audio play Death in Genoa was uploaded to the website of The Independent newspaper in December 2009. In the audio drama Simon Callow plays Oscar Wilde and Samuel Barnett is Omero, a young Genoese rent-boy Wilde picks up who acts as his guide to the city. Thomas Wright’s unabridged script of the drama is published here (for the audio broadcast an entire scene was cut). The book contains a long preface by the author describing the historical context and composition of the play. It is illustrated with a number of evocative photographs of late nineteenth-century Genoa.

Death in Genoa is available direct from the Society at the reduced price of £4.00 inclusive of post and packing within the UK. For postage to other countries, contact Robert Whelan.

TWO WORKS BY OSCAR WILDE, A HELLENIST AT OXFORD

OSCAR WILDE: THE WOMEN OF HOMER, edited by Thomas Wright and Donald Mead, was published for the first time by the Oscar Wilde Society in 2007. The original hardback edition has now sold out and it has been reissued in a paperback edition, still retaining all illustrations. 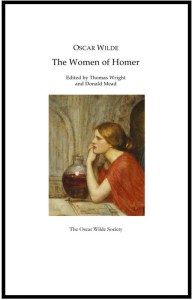 In 1876 Oscar Wilde, then an undergraduate studying classics at Magdalen College, Oxford, wrote an article surveying the chapter ‘The Women of Homer’ from John Addington Symonds’s newly published Studies of the Greek Poets (Second Series). The article was both a review of Symonds’s book and a general introduction to the heroines of Homer’s epics. Wilde failed to complete the piece, abandoning it after penning 8,500 words.

Wilde’s manuscript has survived. Robert Ross seems to have contemplated including it in his Collected Edition of Wilde’s works but he never finished the work of editing it. Wilde’s article, ‘The Women of Homer’, is published here for the very first time. It is his earliest surviving prose work, and probably his first attempt at reviewing. It has been read by only a handful of scholars and Wildeans.

In this book, the typescript of the article which Christopher Millard prepared at the behest of Robert Ross is collated with Wilde’s manuscript, and reproduced as a scholarly reference text illustrated by facsimiles of pages of the typescript and manuscript, and photographs. It is accompanied by a reading text, aimed at the general reader, in which Wilde’s fragmentary article is re-ordered and fully annotated, and illustrated with designs by John Flaxman.

Praise for THE WOMEN OF HOMER
“This book is a wonderful contribution both to Homeric and to Wildean studies”.
PETER ACKROYD

“The editors’ skilful and sensitive rearrangement of the order of the raw manuscript into five sections has resulted in a remarkably coherent and readable essay. This is a beautifully produced edition of Wilde’s earliest surviving prose work, one that is likely to satisfy the editors’ hope that ‘The Women of Homer’ will take its place in Wilde’s oeuvre.”
JOHN SLOAN from the review in The Wildean No. 34

Sometime in 1877 Oscar Wilde, still at Magdalen College, Oxford, wrote down some 2,700 words on the subject of ‘Hellenism’ (i.e. the ethos of Greek culture) making special reference to the city of Sparta. The piece was never published in his lifetime, nor was it apparently finished, having come down to us in fragmentary draft manuscript form. It is not clear whether Wilde wrote it with an eye to publication, or whether it is a series of notes that formed the basis of a lecture, but the latter seems the more likely explanation.

The great Wilde scholar Christopher Millard prepared a typescript of ‘Hellenism’, probably with the idea of publishing it in Robert Ross’ 1908 Collected Edition of Wilde’s works. ‘Hellenism’ was not included in that edition, however, and it would be a further seventy years before Millard’s typescript was published, by the Tragara Press, in their limited edition, Hellenism (Edinburgh, 1979).

Millard’s typescript differs greatly from Wilde’s original manuscript. Not only did he fill in the various gaps of Wilde’s manuscript, and shape the fragments into one continuous ‘essay’, but he also misread Wilde’s words in a number of places. The Tragara Press edition reproduces Millard’s interventions, and errors, without identifying them; it also presents the text without explanatory notes or an introduction. This Wildean edition, the first accurate text of ‘Hellenism’, is based on a fresh investigation of the surviving manuscript pages and Millard’s typescript.

The text of ‘Hellenism’ has also been annotated here for the first time, the notes explaining Wilde’s contribution to various intellectual debates, and revealing his enormous debt to Classical scholars such as J. P. Mahaffy and, above all, George Grote. In his introductory essay Thomas Wright places ‘Hellenism’ in the context of Wilde’s scholarly and literary pursuits at Oxford, and relates it to his Irish Nationalist politics. Wright discusses the various mysteries surrounding its composition, describes the state and chequered history of the manuscript, outlines its themes and style, and considers the light it throws on Wilde’s creative process, and especially his use, and abuse, of his sources.

The Women of Homer (paperback edition) is available with The Wildean (July 2012, containing ‘Hellenism’) for £12.00 including UK postage and packing. For overseas postage rates please contact Robert Whelan.