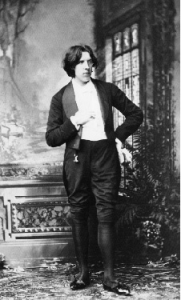 The Oscar Wilde Society was founded in September 1990, by a small group of enthusiasts for Wilde and his works, gathered in the Queensberry Room at the Cafe Royal. This was a very appropriate venue. Here Oscar often entertained his guests, including his lover ‘Bosie’ -Lord Alfred Douglas -and here Bosie’s father, the Marquess of Queensberry, objected violently to his son’s association with Wilde. It was the Scarlet Marquess’s infamous misspelt card ‘To Oscar Wilde, posing somdomite’ which precipitated Wilde’s trial, imprisonment for homosexual offences, and subsequent exile.

The Society has a world-wide membership, predominantly in the UK, but with significant numbers in Europe, the USA, Canada, and Japan. Members include scholars and academics, writers on Wilde and his circle, collectors of Wildeana, other enthusiasts, and libraries and institutions.

Society Memorials include a plaque at the Theatre Royal Haymarket, unveiled by Sir John Gielgud, to commemorate the centenary of the first night of An Ideal Husband and the first production of A Woman of No Importance; a plaque at the Langham Hotel to commemorate the lunch at which J M Stoddart commissioned Wilde to write a story for Lippincott’s magazine -the story which became The Picture of Dorian Gray.

Today, the Oscar Wilde Society is devoted to the understanding and appreciation of Wilde’s life and his art. New members are welcome and details of membership may be obtained on the Membership page.