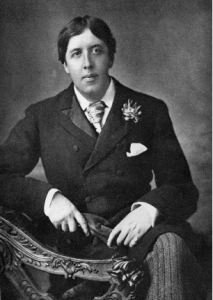 “I have always had grave suspicions that the basis of all literary cliques is a morbid love of meat teas. That makes them sadly uncivilised.” –  Oscar Wilde

Oscar said that in an interview for The Sketch. However, at the Oscar Wilde Society we believe that we have never been regarded as a ‘clique’ and at none of our events, which are invariably the most civilised of occasions, has a meat tea ever been served. Indeed, many of our members are glad to say that they have never seen a meat tea.

Founded in 1990, The Oscar Wilde Society is a literary society devoted to the congenial appreciation of Oscar Wilde. It is a nonprofit making organisation which aims to promote knowledge, appreciation and study of Wilde’s life, personality, and works. It organises lectures, readings, and discussions about Wilde and his works, and visits to places associated with him. The Society’s peer-reviewed Journal of Oscar Wilde Studies, The Wildean, is published twice a year. The illustrated Newsletter Journal Intentions is published about four times a year and members also receive E-Newsletters giving information about Society and public events.

The Society’s Honorary President, appointed in 2015, is Gyles Brandreth, a renowned Oscar Wilde enthusiast. Honorary Patrons of the Society include Merlin Holland, Wilde’s only grandson, who writes, lectures, and broadcasts on his grandfather’s life and works, and whose support for the Society has been invaluable; Stephen Fry who memorably played Oscar Wilde in the film Wilde; Jonathan Fryer, the author of biographies of Wilde, Robbie Ross, and Wilde and Gide; Sir Michael Holroyd; Neil McKenna, Biographer of Oscar Wilde and writer on the Culture and Society of 1890s England; Matthew Sturgis, Historian and author of Oscar Wilde’s latest biography Oscar: A Life; the President of Magdalen College, Oxford; and the writer and researcher Eleanor Fitzsimons.

To view a copy of the Society’s constitution, please click here.